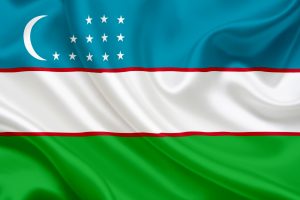 The flag of Uzbekistan - along with the emblem and anthem - is the official state symbol of the Republic of Uzbekistan. Approved on November 18, 1991. The national flag of the Republic of Uzbekistan is a rectangular panel of three horizontal stripes of rich blue, white and saturated green colors throughout the length of the flag. The length of the flag is 250 cm, width - 125 cm. The blue, white and green bands are equal in width. The width of each strip is 40 cm. At the edges of the white strip, located in the middle of the flag, there are red edges with a width of 2.5 cm each. On the upper blue part of the flag on the front and back sides, a white crescent is depicted near the shaft and 12 white five-pointed stars are next to it. The crescent and stars fit into a rectangle measuring 75 x 30 cm, which is located along the horizontal axis of the upper blue band. The crescent is located vertically with the ends from the shaft and fits into a circle with a diameter of 30 cm at a distance of 20 cm from the shaft. The stars fit into a circle 6 cm in diameter. The distance between the circles is 6 cm. The stars are arranged vertically and horizontally in the following order: three stars in the upper row, four in the middle row and five in the bottom row. The lower row of stars is located from the lower edge of the crescent at a distance of 3.5 cm. The symbol of the National Flag of the Republic of Uzbekistan continues the traditions inherent in the flags of powerful powers existing on the territory of the country, simultaneously reflecting the natural features of the republic, the national and cultural identity of the people. The sky-blue color on the flag is a symbol of the blue sky and clear water. The azure color is revered in the East, once it was chosen by Amir Temur for his flag. White color is a symbol of peace and purity. A young independent state must overcome high passes on its way. The white color on the flag means a good wish that the path be clean and bright. Green is the embodiment of a fertile nature. Now the whole world is expanding the movement for environmental protection, the symbol of which is also green. Red bands are the vital forces that pulsate in every living being, the symbol of life. The crescent corresponds to the centuries-old tradition of the people of Uzbekistan. The crescent and the stars are the symbol of the cloudless sky of the world. and the flag of Uzbekistan is 12 stars. The number 12 means 12 stellar months, it is also sometimes believed that the number 12 symbolizes the sign of perfection (for the Muslim world this is an important number, for example, 12 years, boys become men) and 12 regions. This statement is not entirely true, it is officially considered that 12 stars - 12 star months. The national flag is a symbol of the past, present and future. The flag of Uzbekistan rises with the reception of state delegations under the leadership of the President to foreign countries, as well as with the reception of foreign state delegations in Uzbekistan. The national flag is installed on the roof of the residence of the President of the Oksaroy building, the building of the Oliy Majlis (Parliament) of the Republic of Uzbekistan. Also, the flag of the Republic of Uzbekistan rises at various world competitions when athletes from Uzbekistan, prize-winners of competitions enter the pedestal.