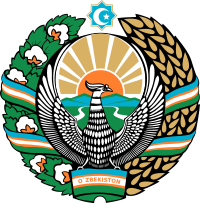 The State Emblem of Uzbekistan is the official state symbol of the Republic of Uzbekistan. Approved on July 2, 1992. The State Emblem of the Republic of Uzbekistan is an image of the rising sun over the mountains, rivers and flowering valley, surrounded by a wreath, on the right of wheat ears and to the left - from cotton branches with open cotton bolls. In the center of the emblem is depicted Humo (bird of happiness in Uzbekistan) with outstretched wings - in Uzbek mythology a symbol of happiness and freedom of love. The Uzbek poet Alisher Navoi described the Humo bird as the most good of all living beings. In the upper part of the emblem is an octahedron, symbolizing the approval of the republic, inside - a crescent with a star. The image of the sun symbolizes the light that illuminates the path of the Uzbek state, and also emphasizes the unique natural and climatic conditions of the republic. The two rivers depicted under the bird are the Amudarya and the Syr Darya, which flow on the territory of Uzbekistan. Ears are a symbol of bread, stems with open cotton boxes characterize the main wealth of Uzbekistan. Together, the ears and cartons of cotton intertwined with the ribbon of the National Flag symbolize the consolidation of the peoples living in the republic.